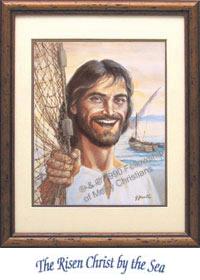 (The following article appeared in a 2014 issue of The Joyful Noiseletter. Subsequently, in 2016, Robert D. Reed Publishers of Bandon, Oregon published a paperback book based on this article titled The Physically Fit Messiah--Wellness Wisdom PAST and PRESENT BY Cal Samra. The book may be ordered from The Joyful Noiseletter's online store at this web site or by calling toll-free 1-800-877-2757. Bookstores may order the book from the publisher by calling (541) 347-9882.)

With the widespread public interest in physical fitness in and out of many churches, it has somehow been overlooked that Jesus was an amazingly physically fit Messiah. In an age that worships a flock of phony cartoon superheroes, Jesus was the ultimate action superhero 2,000 years ago.

Here was a man of great stamina who walked everywhere between the villages of the Holy Land in his ministry of salvation, and there is no record in the New Testament that he ever rode a horse, a camel, or a carriage, though he did once enter Jerusalem on a donkey, displaying an ironic sense of humor.

He regularly traveled over hills and climbed mountains. From time to time Jesus worked as a carpenter, and so was surely lean and muscular, contrasting dramatically with the sedentary clergy of his times.

He was not a body-builder growing his muscles with weights for show in front of mirrors. Jesus’ physical fitness was used in the service of others.

Jesus, the Great Physician, the healer, was supremely healthy, robust, loving, and joyful. Would God have sent us an obese, sickly, depressive Messiah for our salvation? Who would have listened to him?

Jesus, in numerous ways, reminds us again and again in the Gospels that God made the body to be used in the service of others. Jesus came to us with a message of salvation through both spiritual and physical fitness.

The Gospels, especially Jesus’ parables, are replete with action words. The parable of the Good Samaritan is a prime example.

“But be doers of the word and not hearers only, deceiving yourselves.” (James 1:22)

Jesus reserved his harshest words for those “who say and do not do, for those who preach but do not practice.” Jesus called these clergy “lovers of money” (Luke 16:14) and “hypocrites” (Luke 16:14), and, of course, they did not appreciate that.

What did Jesus eat?

We can be certain that his mother, Mary, made a sustained effort to feed her son home cooking and a healthy, natural, Mediterranean diet. It was Mary’s labor of love for Jesus, and he was bathed in Mary’s love.

Like many of the Jewish women of her times, Mary was a masterful nutritionist and cook. Her nutritional knowledge and knowledge of medicinal herbs had been handed down for centuries from mothers to daughters. Mary was not about to raise her Messiah son on junk foods.

Very occasionally, for religious holidays and special events, like weddings, Jesus’ family probably ate lamb or chicken, but meats were not central to the Mediterranean diet, and, as they are today, meats were used very sparingly in dishes, mainly as seasonings.

Jesus’ diet was probably mainly plant-based, and today would come under the category of “health foods” at very dear prices. But these health foods were much cheaper in Jesus’ times because many families cultivated their own extensive gardens.

Because of the healthy diet Mary fed him and his daily strenuous physical activity, the boy Jesus grew into a strong and healthy man bursting with energy.

We also know that Jesus ate in moderation and fasted and prayed frequently, and that he often sought quiet and rest.

Interestingly, several recent studies by modern medical scientists have found that the Mediterranean diet may well be the healthiest diet in the world.

A five-year medical research study, reported recently in the New England Journal of Medicine, confirmed that the plant-based Mediterranean diet significantly reduced (by 30%) rates of heart attacks and strokes.

Science News also recently reported that “people who eat a Mediterranean-style diet are less likely than their peers to develop Alzheimer’s disease,” according to new research on elderly Manhattan residents.

In his famous book, The Imitation of Christ, the Catholic priest-monk Thomas á Kempis (1471) focused exclusively on the spiritual qualities of Jesus. It is a beautiful book, but it neglected the physical side of Jesus.

In our 33 years of publication, The Joyful Noiseletter,which has never accepted advertising, sometimes has gone where angels have feared to tread. Insufficient news coverage has been given to the massive grass-roots explosion of farmers’ markets, organic farming, organic gardening, Grow Local campaigns, and a return to healthy cooking and eating throughout the country.

Like it or not, this is a sign of the times. Early Christianity was intensely occupied with matters of the health of the mind and body, and with healing. Health is a primary concern for all Americans, and if we don’t address the matters dearest to the hearts of people, they will no longer consider us relevant.

Some of the enlightened medical doctors on JN's board of consulting editors wrote splendid books on good nutrition, physical fitness, and prevention, and also contributed articles on health to JN.

We've all known lots of Christians suffering from illness or handicaps who continue to reflect the good cheer of Jesus, but clearly it is easier to reflect good cheer when one is healthy. And that's why JN has become keenly interested in prevention and health matters.

(Cal Samra is editor and publisher of The Joyful Noiseletter – www.joyfulnoiseletter.com, and former lay executive director of the Huxley Institute for Biosocial Research, a medical research foundation named after biologist-geneticist Sir Julian Huxley and his brother, novelist Aldous Huxley.)

You can subscribe to the printed or electronic version of JN by: